Lighthouse Reef: It is Good to be Back

Ahoy from the night-shift crew of the BlueJacket! 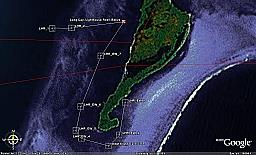 It's another spectacular night in Belize. I'm sitting in the cockpit enjoying a pitch black sky emblazoned with glowing embers. There's not a man-made light within 30 miles and the Milky Way is cutting a swath across the sky. One doesn't realize just how bright the night sky is until you're in a place like this. In the distance lightning storms are flashing over the mainland.

One would expect the water surrounding the boat to be inky black, but that's far from reality. Its full of glowing objects which cause the water to fluoresce. Sometimes its a brief flash; other times there's an object glowing brightly as it floats past the boat. What are these things? I have no idea. I'm just a spectator enjoying the show from the deck of the boat.

The weather has been spectacular. During the day it's been in the mid-80s and at night it drops to the mid-70s. The air has been wonderfully dry with nice breezes keeping you cool. You can't imagine a more perfect climate. Combine this with an anchorage that surrounded by azure water and you can see why we keep coming back.

It's amazing how quickly the climate changed. While we were in La Ceiba we had day upon day of rain and suddenly it was like someone flipped a switch and it went from the rainy season to the dry season. This is a major reason that we don't head out cruising until at least mid-February. Before that cold front after cold front whips through the region with high winds, cold air and rain. As you approach the end of February the cold fronts lose their strength and fade out before they get here. The weather and the water turns warmer and it's a joy to be out on the water. 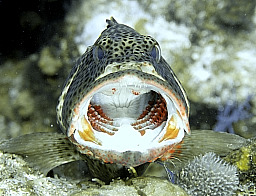 We've been at Lighthouse Reef in Belize for 2+ weeks and have been having a wonderful time. Pretty much we've been by ourselves, but that hasn't been a problem. Most days we're diving 2 times a day. As far as I'm concerned, Lighthouse Reef has some of the best diving in the Caribbean. I've been shooting lots of digital film and have been working at improving my technique. Underwater photography is highly technical and it's amazing how much you have to relearn or figure out either due to forgetfulness or new equipment. Up until recently the water was relatively cloudy, but now its getting back to 100-200' of visibility. While most of you have no idea what its like to swim along a sheer wall which drops off hundreds of feet below you, believe me its impressive when you can see to the bottom and watch huge Groupers or Rays swim out of the deep.

In a few days we're going to head into Cay Caulker to take care of paperwork and re-provision. Kim and Carl from Querencia seem to have resolved their engine problems and soon they'll head down here and we'll spend a month with them. Lone Star Love has finally broken free of the Shipyard and will be heading this way also. It will be great to see everyone.

We hope that the winter hasn't been too tough on anyone and that spring is starting showing its head. Stay in contact. We enjoy hearing from people.