We actually made it out of the marina and shipyard! I was beginning to think that we never would make it out. Between orders not being placed, shipping delays and weather, it sure felt like the fates were conspiring against us. Happily everything came together at the end and we're back out sailing (or should I say "cruising" which translates to anchoring and diving for us.) 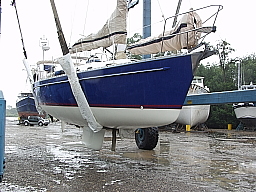 When I last wrote we were waiting and waiting for the paint which I had ordered on December 9th, but the La Ceiba shipyard never actually placed the order until we got to the boat in mid-January. Then, due to a series of screw-ups the paint didn't arrive until February 10th. You might also recall that our dinghy suffered a major tube rupture and we were waiting for a new one which arrived on the freighter containing the paint. If I wouldn't have been waiting for the dinghy I would have just said "screw it" and left. As it was we had to wait.

Our stay at Lagoon Marina took some unexpected twists. Lagoon Marina is a beautiful place with nice docks, good power, beautiful grounds, and a wonderful pool. It's run by Rita and Toni who are German. Rita runs the office and pretty much the marina. Typically she's got a heart of gold and works hard to keep the cruisers happy. Unfortunately she's only one person and is often trying to do 10 jobs at once. Toni runs a small boatyard and does welding, fiberglass and is the Mercury and Volvo/Penta dealer for the area. He also has a temper that I ran into.

The marina provides free wireless Internet to the docks. Something is mis-configured and the performance was abysmal. We've been at other marinas that had the same setup and there were no performance issues. Toni's solution to this problem was to unplug the wireless router which feeds the docks whenever he wanted to use the Internet. When I discovered this I tried to talk to him about it and he shouted me out of the office. I then sent him an e-mail stating, very nicely, that there were problems with the configuration and that while unplugging the wireless router might make things faster for him, it didn't solve the root problem and that if it was properly configured, everyone would be happy. It seems that doing this was a fatal mistake (I suppose informing the other boats on the dock about this was also a mistake...) From that point on we had a very strained relationship and despite the fact that I had diagnosed some of the problems, I didn't dare bring my findings up. The paint finally arrived and there was a very small weather window in which to get the boat painted and detailed. We arranged with the Shipyard to haul BlueJacket at 2 PM. That morning we talked to Rita about pulling of the dock at 1:30. You need assistance as the boats are Med-moored (one end of your boat is tied to the dock and the other end is tied to a mooring ball) side by side and you need help releasing the lines from the mooring balls. Since our dinghy wasn't unpacked yet, we couldn't do it ourselves. Besides, Toni always helps. Well, 1:30 came and went and no one showed up to help. Sue called on the VHF and was told that it was "pouring." Oh well! At 1:45 Sue went to the office and Toni yelled at her stating that they had on office full of people and that we were last on his priority list. Incredibly unprofessional! The shipyard sent a skiff to untie the lines to the mooring balls and several cruisers helped us out of slip. Amazing!

We arrived at the shipyard at 2:15 and were promptly hauled, power washed and had the stands installed. This is typically a 2 hour process and as they shipyard stops working at 4:00, so it was critical we got out at 2:00. The weather cooperated nicely for the next 2 days and on Monday we were ready to be splashed and move back to Lagoon Marina.

Monday morning Sue & I stopped at the marina and discussed which slip we were going to pull into. There were 5 empty slips and I wanted something that we could easily get into and out of. Just prior to splashing I called Lagoon Marina on the VHF and Toni got o n to tell me that they were full and asked if I "understood him." I called him a liar and said that I knew that there were empty slips. He said that they only wanted to surround themselves with "nice" people. Clearly this wasn't going well, but luckily the Shipyard had a slip available, so we pulled in there. What further amazed me was that this played on on the VHF channel that everyone in the shipyard and marina monitor, so everyone knew about it. Afterwards quite a few people came up to tell us about their issues with Lagoon Marina and how they had also been banned. I was told to never complain about anything at the marina. Good advice, but a bit late for us. There's a long story about some scratches that we received at the marina, but I won't go into that.

I've determined that I have 2 characteristics which seem to draw out problems like this. 1) When I see a problem that needs correction, I act on it. Most other cruisers just complain among themselves, whereas I'll try to solve it. 2) I write about my problems and put it out for the world to see. Things like this happen to other people, but they just tell the story to their cruising buddies. Oh well...

We spent the next two days provisioning and getting the boat ready. On Wednesday we cast the dock lines off and headed to Utila. Utila is only 20 miles away, but due to a lack of wind we had to motor. The good news was that it was fairly calm, which was good for Sue's first passage of the year. The next day we left Utila at daybreak bound for Lighthouse Reef in Belize. We had very light winds to start, but at 9 AM the winds piped up and we had an amazing sail, running at hull speed (8.2 kts) and above for about the next 9 hours. We covered 86 miles in 11 hours. Wow! We even hit 10.6 kits. Obviously the new sails performed well. We pulled into Lighthouse Reef just after 6 PM.

The weather has been spectacular with lows in the mid-70s to highs in the mid-80s and dry. We've been diving 1-2 times a day and are happy to be back in the water. The new dive compressor is working well.

Our friends, Kim and Carl on Querencia, have been stuck in Isla Mujares with engine problems. They work for an airline and have been running back and forth to the States to get parts. The motor is finally running, but the exact cause is questionable. They were supposed to have met us here on the 14th, but probably won't be here for several weeks as Carl has to head back to work.

That's about it from here. We hope that things are well with you.