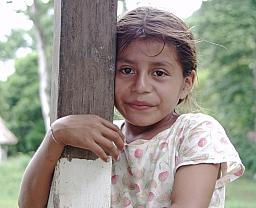 This message is a bit outdated and out of sequence, but as my last posting showed we were a bit preoccupied with everything that was going on at Tortugal. With the fire in the past, I now have time to describe an incredible trip that we took with a person known as the Jungle Medic.

Last January we met Bryan Buchanan, who's known as the Jungle Medic, and his wife Riechelle. They live near the Tortugal marina and have dedicated their lives to providing medical and dental care to the Mayan Indians who live in the jungles and mountains of the surrounding areas. He and Dr. Magna also provide medical services to the cruisers and locals in the Rio Dulce area.

Bryan served in the US Air Force as an oral surgery technician and then became a Firefighter/Paramedic as a civilian. He ran a very successful insurance business and then decided that he needed to give something back to the world. He and his wife sold their home and possessions and moved to Central America. After several attempts to find an area where they could be most useful, they settled in the Fronteras area in a very modest rental home. I don't know how many women would put up with their housing situation. The upstairs where they live has no interior walls or windows and the downstairs is dedicated to storage, bunk rooms for teams that come in to help, and a kitchen. You have to give Riechelle a lot of credit. 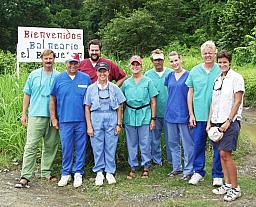 Bryan takes volunteer teems to assist him when he goes to the villages. Just after we arrived at Tortugal he was going to take a group to a village named Santa Elena, which is high in the mountains. A group of about 8 people from Tortugal volunteered and the day before we were to go we met at Bryan's where we got basic training and we put drugs and vitamins into smaller containers for distribution.

It rained the night before we were scheduled to go, and that wasn't good. We had a lot of steep hills to make it over in a van and then we had to walk across a final river. We made it up the first hill, but we got to the crest of the second we were confronted with a broken down truck that was in the middle of the road and wasn't going to move anytime soon. Bryan decided that we should go to another village known as El Boqueron, which was at the foot of the mountains and much easier to get to. The bad thing was the people of Santa Elena were expecting us and the people at El Boqueron weren't. 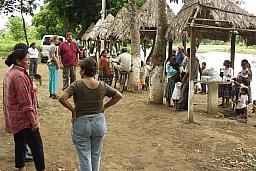 The road to El Boqueron was fairly flat and had just been graded, so we had no problem getting there. El Boqueron is a local tourist destination on the holidays. The village has constructed a bunch of tables with roofs along the river where people come to picnic and take pongas (small boats) into the nearby canyons. It's a very pretty area and was where Bryan decided to set up the clinic. When we got there the chief's wife was there and she dispatched someone to let the village know that we were there.

We set up 5 different stations on the tables and teams were assigned to handle different types of issues. Bryan would diagnose the problems and send them to the appropriate station. When the person arrived at the table we were expected to treat them. Because we were wearing scrubs they looked at us as doctors. This was scary considering that none of us had any real medical training. I just suppose that it's a matter of perspective as despite how little we knew, they knew even less. And to set the scene, there were pigs tied to the tables next to us. 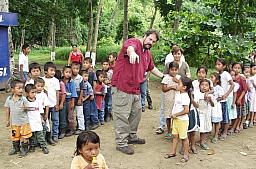 Before long people began to arrive. I think that the entire school showed up too. Most of the kids didn't have problems, but we dispensed vitamins, tooth brushes and shampoo to all of them. To put it mildly, they have terrible dental hygiene. Sue and I were assigned to the skin problems table and we got to see some terrible cases of Impetigo. Impetigo is sores caused by playing in feces ridden soil and then not washing. The worst case that we had was a baby covered from head to toe with sores. We had to clean all of the sores and then coat the sores with a cream that is supposed to clear up the sore in a single application. To say that the baby didn't enjoy being treated would be an understatement. Then again, compared to some of the other problems that other people had, this was nothing. Asthma is a major problem as most people cook in enclosed thatched roofed huts and are constantly breathing the smoke. Bryan treated an amazing variety of issues from cuts to a baby with a fatal heart condition. It was really an eye opening trip. 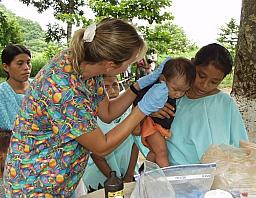 If anyone is interested in helping the Jungle Medic out, please visit a web site that I've just created for him. It's at www.JungleMedicMissions.org and it shows the work that he does, equipment that he needs, photos of trips, etc. He also hosts teams of doctors and dentists, so if you're interested in this, give it some serious consideration, as it will be a life changing event. Right now a good friend of mine, Eric Mandelbaum, who is an oral surgeon, is trying to put a team together for early January. If you're a dentist who's interested, please let myself or Bryan know, and we'll put you in contact. Or if you'd like to donate money or supplies, see the site. This really changes peoples lives.

Thanks for reading and hopefully thanks for helping!

El Boqueron with the Jungle Medic