Ahoy from the Rio Dulce in Guatemala!

It's been a long time since I've written and this report will be a bit out of sync with several other reports that I need to file, but I feel the need to let people know what a wonderful group of people has accomplished over the past few days. 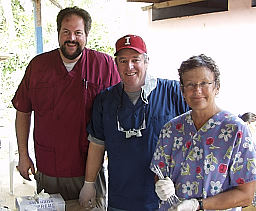 While we've been in the Rio Dulce we've had the privilege to get to know and work with Bryan & Riechelle Buchanan who are known as the Jungle Medic.  Over this past summer we convinced (or is the term connived?) our friends, Eric and Jenn Mandelbaum to come to Guatemala to assist Bryan.  Eric is a dentist and through his extensive contacts was able to get another dentist, Dr. Gregg Davidson (and his wife, Minerva) from the San Diego area to come and provide dental care to some of the Mayan Indians who live in the jungles surrounding the area.  Pam Westrom, who is a retired dentist from the Boston area, also joined the team. She was our dock mate and volunteered to help out when she heard what Bryan was doing.  She was a great addition.

The first problem that we had to deal with was the snow storm that invaded the North East which dumped 2-3 FEET of snow on the Boston area.  At home in Marlborough, we received 26-28" of snow, and Eric lives nearby. Eric attempted to get out early, but was rebuffed by airline employees.  He eventually got down here on Tuesday, instead of Sunday, and that greatly reduced the number of his days down here.  Gregg and Minerva made it here without incident. 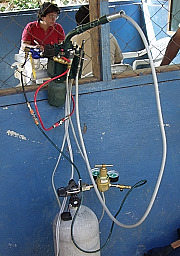 Bryan has a whole set of portable dental equipment which is run by compressed air (which in this case is my scuba tanks).  His gear also includes light weight dental chairs which collapse to incredibly compact dimensions.  Unfortunately the rest of the gear doesn't collapse anywhere near as much.  You'd be amazed at how much stuff a "dental office" needs to provide the most basic services, and it's not small.  Bryan has it all packed in dense bags which get hauled to the sites.

Our first site was village several miles down river from where Bryan.  Bryan has a launch with a 75 HP motor that he uses to respond to situations on the river.  Shortly after Bryan left his house to pick us up he called on the VHF radio and sounded incredibly tired.  When I answered he told me that his launch and motor had been stolen!  He had seen his boat at 9 PM the prior evening, and during the night someone had swum to the boat, cut the cable and lines, and had stolen his launch.  This was not good...

I was able to cajole the owner of our marina let us use one his launches to haul our group to village.  Believe me, this was not easy considering that I woke him out of a sleep to make this request...But Kevin was a good guy and let me do this. Our first village was located about 3 miles below Fronteras, which is the major town in the area.  It's hidden in a small bay and up the hills behind some nice houses along the river.  You'd never know it was there while traveling along the river.  A group of villagers transported our gear to the village. Once we were there, we set up outside of the school/meeting area/etc.  This was the central building and had a cement floor (unique) and a thatched roof.  Other than underfoot dogs, our biggest problem was crowd control, as the throngs of people were constantly encroaching on our space.  I'm not sure how Bryan did it, but at times he was surrounded by people while he was extracting teeth.

I think that this was a bit of a cultural shock for Gregg and Minerva.  Believe me, Sue & I have many times discussed the culture shock of this area.  And Fronteras isn't bad compared to other areas that we've been.  The typical tourist never sees this side of life, and here they were thrust into the bowels of Guatemalan poor village life!  WOW, what an intense shock!

We were swarmed by villagers who needed dental treatment.  I would guess that we probably saw close to 80 people during our stay.  I was the scrub nurse, cleaning all of the dental gear, prepping syringes and trying to keep the dentists working.  Believe me, it wasn't easy as the dentists were used to having professional staffs keeping things flowing.  I and everyone did their best, and we saw a lot of people.

After we returned Bryan was informed that his launch had been recovered, but that motor was missing.  Surprise, surprise, but at least the launch was found!  It appears that there has been a lot of thefts of motors lately.  I personally believe that this will be resolved locally.