Ahoy from a banana plantation in Guatemala!

This is my final report on the work that the Jungle Medic Dental Team provided during this mission.  There will be a lot more dental and medical missions, but this is the last day of work for this team.  The day started off early as usual and we were on the road by 8 AM.  Bryan had done medical missions at this plantation before and realized that they desperately needed dental care too.  This plantation is run by Del Monte and is on the road to El Estor.  We had stopped there on day 2 to make sure that they knew that we were coming. 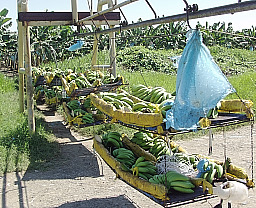 As you drive along the road to El Estor you can look down into the valley and see the banana plantation stretching for miles in each direction...almost as far as the eye can see.  There are many plantations like this in Guatemala.  When we arrived we had a chance to see how the bananas are harvested and processed before they're shipped to the US.  Banana trees have 3 trunks or feet.  One foot is growing the current crop of bananas, another foot just has a trunk and leaves, and the 3rd foot is sprouting and growing.  When the bananas are harvested, that trunk is cut off to the roots and the process begins again. 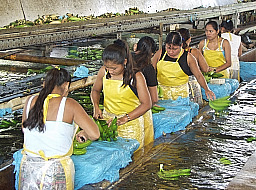 The process of harvesting bananas involves intense manual labor.  In the fields you have workers cutting down the stalks of green bananas and carrying them to an elevated rail where they're placed in hanging carriers.  These carriers form a long train, which is pulled by a person all of the way back to a central processing location.  And let me tell you, it can be a long way from where the bananas are cut to the processing station.  Inside the processing station the bananas are sorted, washed, and boxed for shipment.  Only perfect, correctly sized bananas are selected for shipment.  Believe me when I say that I'll never look at a banana the same after watching this operation! 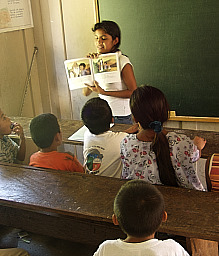 We set up operations along side of the school.  This wasn't much of a school as it only had 2 small rooms and the classes were being taught by older children.  But at least there was school.  It sure didn't look like there was much learning going on.  Our biggest problem was finding a relatively clean and shaded location to set up.    We eventually picked a location that had a corrugated steel roof and at the end of the school where it was shaded.  Hardly ideal, but it would do.

After we set up we began to wonder where the workers were.  They were only straggling in, and Bryan was quite upset.  He had stopped there several times to arrange this visit, and it appeared that the management wasn't letting the workers off to receive treatment.  As a result we only saw a dozen or so patients and around noon Bryan made the decision to pack up team and leave.  Bryan said that he was trying to send a message to the management, but I felt like the management didn't care and the only ones who were losing out were the workers who arrived after we left.  Then again you can't have a team of dentists standing around twiddling their thumbs.

After we left the plantation we headed to the hot water falls and everyone had a great time lounging in the 100+ degree waterfalls and cool pools of water that make up this wonderful location.  Wow, what a treat after 4 long days of work.   Sue, who's fever had returned, even got in and had fun. 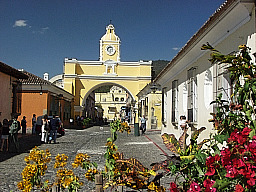 The next day most of the team headed to Antigua for some sight seeing before heading back home.  We had a great, albeit short, time in Antigua.  The team got to do some power shopping and we enjoyed some good meals together.

I think that Gregg and Minerva really got a lot out of the trip.  They were really touched by the people and were making plans to come back again.  It was really a pleasure making their acquaintance and we hope to see them back down here again.

Sue's fever kept coming back and she developed an itchy rash on her legs and palms. She described it as feeling like she had rolled in fiberglass insulation.  Yuck!  Bryan contacted a doctor who agreed to see Sue at a friends house in Guatemala City on Sunday morning.  Amazing!  A doctor was going to make a house call on a Sunday morning to see someone who he didn't even know!  After examining Sue he diagnosed her with the mildest form of Dengue fever that he'd seen.  Dengue comes in multiple strains, and thankfully Sue had come down with a mild form.  Bryan and Riechelle had come down with it when they returned from the States, and they didn't have the same luck that Sue did as their symptoms included "bone breaking" pain in the bones and joints as well as intense fever and chills.  The worst form is hemorrhagic Dengue fever where your organs are compromised and there's bleeding from the orifices.  Luckily the later is relatively rare around here, but there seems to be a lot of the other types in the Rio Dulce area.  The doctor prescribed some antibiotics and an antihistamine for the itch.  He also said that Sue would be tired for about a week.  I joked that how would I know when the week was over?  :-)  Since then she's recovered well and has been experiencing sympathy tiredness for all of the boat work that I've been doing. 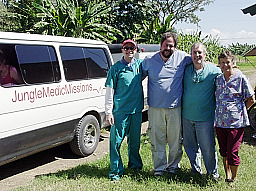 That's about it for now.  I'll report on what's transpired since we returned to the boat in a separate log.  I hope that you enjoyed these reports.  Please visit the Jungle Medic's web site at www.JungleMedicMissions.org to see all of the work that he does and how you can help.  Oh, yesterday I mentioned the need for additional drill hand pieces.  It seems that many dentists have switched to a new quick-disconnect type of drill and their old drills have been shelved.  These drills would probably work great down here.