Ahoy from a small village near El Estor, Guatemala! 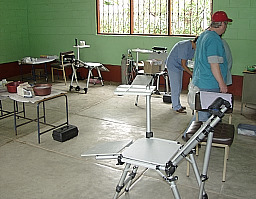 This report covers day 2 of our Jungle Medic Dental Team mission.  Today we went to a small village near El Estore.  I'm not sure about the spelling, but that's how it's pronounced.  This village was about 1.5 - 2 hours away by car.  I'm also not sure about the actual distance, as there's only so fast that you can drive on washer board and pothole filled dusty dirt roads.  I can assure you that it was very nice to arrive at our destination.  Sue wasn't able to make this trip as she's been down with a fever and she's not a happy camper about being stuck on the boat again.

We were greeted by throngs of villagers.  We set up inside of the school, which basically meant that we had cement floors, walls and a ceiling, but no electricity or lights.  Having a door and walls greatly helped with crowd control.  That  was good as it allowed us to keep track of the patients that had been numbed and were waiting to be worked on.   Yesterday we had several people disappear on us.  I'm not sure if they thought that they were done or if they chickened out.  However, I felt like I was isolated from the people and didn't get to interact with them.  But, it was a much better working environment. 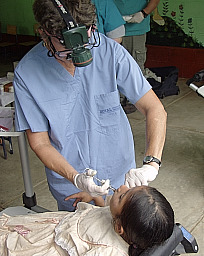 I'm not a dentist, but even I could clearly see magnitude of dental work that needed to be done on these people.  For some reason their teeth were in much worse shape than those of yesterday's village.  Young children just had their teeth rotted away to the gum line.  We didn't begin to see as many people as we did the day before as those that we did see required so much more care.

Bryan only has one drill setup, so the dentists have to share it.  We came up with a better chair arrangement, which made sharing much easier.  Today I was promoted to Pam's dental assistant and got close up and personal with dentistry.   I swabbed, held lights and patient's hands, filled syringes and anything else that I could do keep this organized and moving./p> 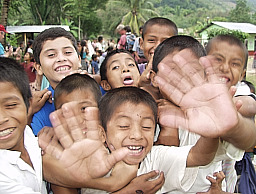 We stopped working at around 3 PM and we wandered around the village after packing up.   Masses of kids followed us around and loved to have their pictures taken. After we left the village we stopped at El Boqueron to let Gregg, Minerva and Pam take a boat trip up the river canyon.  I had done this the year before, and it was beautiful.  While we were waiting for them to return a troop of howler monkeys in the trees above us began to howl and they were answered by another troop across the river.  That was quite the sound!  We didn't get back to the Rio until dark.  It was a long day, but good.  Sue was feeling better and swore that it would take wild horses to keep her from going tomorrow.