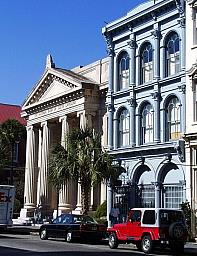 The last time that you heard from me I had just arrived in Charleston, SC after an all night sail. Since we had sailed for 19 hours off-shore, we were going to rest in Charleston and then leave the next morning. I decided that I wanted to view the city, so I took a cab to a ferry dock and took that into Charleston. I spent the day wandering around the city enjoying the sights and having a nice lunch. It's amazing the amount of construction/renovation that's going on in the city. Cleary they're using these economically prosperous times to upgrade the city. There are lots of wonderful old buildings and churches to visit, and I did my best within the 5 or so hours that I had. Take a look at the website to see what I mean.

That evening we met up with a friend of AJ's who lives in Charleston. He took us out to a great little hole-in-the-wall place, where we had a great meal. Bob was very nice, and provided a lot of insight into the area.

On Tuesday, 10/27, we left Charleston for Savannah, GA. We headed off-shore to make time. The ICW winds throughout SC and GA, and we had no desire to suffer through that. The major difference is that you see a lot and get to know the area by the ICW, whereas by-sea you make great time but you don't see much from 20 miles out. By going out to sea, we probably cut off a good part of a day. I think that our most interesting adventure was watching some armed forces practice parachuting in the water with some kind of gear that came down separately. 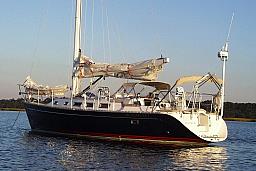 Another major change in this part of the country is that the water is very shallow for quite a distance from the shore. As a result it can take upwards of an hour to come in and find an anchorage/marina. Now that we're back to standard time, our days start very early. Typically I'm up at 5:00 and we're underway by 06:00 at the latest. The sun rises around 06:40, and sets at about 17:30, which is about when we get in. As a result, we don't waste any daylight.

Wednesday, the 27th was another day at sea. We made it to the Wassaw (no, not the insurance company) Sound and anchored there. Not much to report other than the weather has been perfect. Low 80s during the day, and low 60s at night. My tan is progressing nicely! :-)

On Thursday we headed back out to sea. Our goal is to make it to St. Augustine, FL. At about 10:00 we crossed the GA/FL state line. WOW! I'm actually getting closer to the final destination! When I left almost 3 weeks ago, it seems like Florida was immensely far, but we're getting much closer. 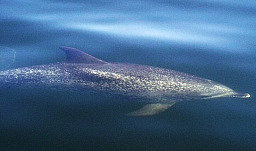 As in most days at sea, not much happens. At 14:00 John Glenn was scheduled to lift off. We were about 110 miles away, and while we wouldn't "see" the launch, we would be able to see the smoke trail. At launch time I was below watching it on TV. Just as the launch started AJ yelled "Geoff, get up here!" I ran up and AJ pointed to a huge pod of Dolphins swimming with the boat. There are Dolphins on either side swimming along and jumping out of the water by the bow and by the sides. At the same time the shuttle is taking off and we can see the smoke trail going up. What to do!?!? I grabbed my camera and started shooting the dolphins. Then I quickly switched back to the shuttle and then back to the Dolphins.

We could clearly see the solid rocket boosters detach. Unfortunately I had the camera set up with a long telephoto to shoot the launch, and that doesn't work too well with the Dolphins next to the boat. Then, almost as soon as they appeared, the Dolphins disappeared. We had run into a gigantic swarm of Jelly fish. By gigantic, I mean miles across. There were 3 or 4 per square yard! These were about the size of a softball, and were a light tan at the top going to a dark brown at the bottom, with white tentacles. Intermixed with them were the traditional pink/translucent Jelly fish, which were 12 to 18 inches across. We later saw a large sea turtle out snacking on them. For all intents and purposes, this whole event only lasted 15 minutes at the most, and then we were back to the empty sea. Why couldn't these have been spaced throughout the day!?! Murphy's law I guess. 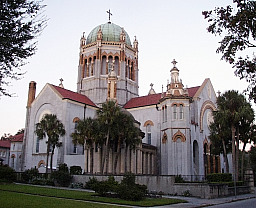 That night we got to our anchorage around 5:00 and headed ashore around 5:15. I ran around like a mad man trying to photograph the city in the remaining light. Within 1/2 of an hour I had made a quick round and managed to see some nice sights.

Friday morning we headed down the ICW towards Daytona. Talk about beautiful houses lining the ICW! Man, there's big bucks around here. There are several sections of the ICW around here that are very shallow, and that made for some "interesting" navigation. Unlike some other boats, we didn't go aground. We made it to the marina mid-afternoon, and AJ went off to visit some friends. He grew up around here, so he was anxious to meet up with them. I enjoyed a quite night and had the luxury of sleeping in until 8:00 and then reading in bed until 9:00. During the day I've washed down the bathroom, washed the boat cushions, did laundry, changed the oil, created some web pages, and have written this. After having been cooped up in a 40' boat for 3 weeks, it's nice to have some peace and quite and some personal space. I'm sure that AJ feels the same. But we're still getting along just fine.