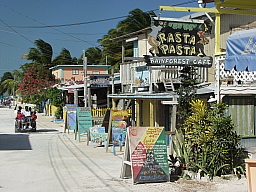 From what we've been hearing it sure sounds like spring has sprung in most areas! I'm sure that it's wonderful to see signs of life returning as the flowers push their heads into the sky and grey of winter transforms into green. I know that it's one of my favorite times of the year and I do miss seeing the transformation.

Speaking of favorite things, we're in one of our favorite places: Cay Caulker, Belize. It's an incredibly laid back town with lots of shops and restaurants and in general it's just a fun place to be. We headed here on Monday, June 6th after a wonderful stay at Lighthouse Reef. Lighthouse was beginning to become popular, or shall I say that we didn't have it to ourselves anymore. Unfortunately one of the boats that came out was a plague ship loaded with a bug that was going around on shore. We only spent an hour with them, but Sue managed to come down with the bug on the night that we were scheduled to head in. Other people were down for 2-3 days and were testing the toilet from both ends. Unfortunately Sue's symptoms mirrored that and I was prepared to stay until she got better.

We decided that it would be better to leave, as the weather was about to get rough and we'd have a hard time getting in if I got sick. I felt sorry for Sue as when we left we were running dead down wind without enough wind to keep the sails full. We had 4' seas that were rolling the boat and without the sails up, there was nothing to stabilize the boat. Luckily that only lasted for 3 hours and then we rounded Turneffe island where we much flatter seas and a great wind angle to sail. We made the 55 mile sail in less than 10 hours, so I was quite happy. Sue was feeling slightly better by the time that we arrived and within 36 hours was back to normal. I am happy to report that I never came down with it.

The weather didn't really deteriorate while we were there...the winds just started blowing and blowing and blowing. We had day upon day where the lowest that the wind blew was 25 mph and at night it increased and it would gust into the 40s. Believe me, when you're a boat hanging on a anchor, you feel and hear that wind! The boat shakes and shudders as it pulls against the anchor chain and it just howls through the hatches. Needless to say, that doesn't make for good sleeping. Getting into shore was also challenging as winds of this strength can build up 1-2' seas within the anchorage. There were days where we had to wait for the winds to subside before we could go ashore. 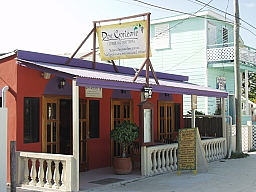 While we were there we decided to take a vacation. Now I know most of you are thinking that we're on permanent vacation, but that's far from the truth. Living aboard a boat is project after project. Every day you typically have at least a couple of hours of projects, if not more. We decided to take a break from the projects and just relax. We went ashore with our books, read under shade of palm trees and overall had a wonderful time. We became regulars at our favorite restaurant, Don Corleon's, and had some great food.

After a while this got a bit boring and it looked like the weather was going to break. We had to go to San Pedro to do some paperwork, so we took BlueJacket over there. The anchorage at San Pedro is terrible. It faces the reef and there are tons of water taxis that blast through the anchorage. You have to dive on you anchor to set it, and when you do so, you take your life into your hands due to the water taxis. The high winds made it rougher than normal and we had several wet rides to & from shore. But we got our paperwork completed and we restocked the boat with food that you would never find in Cay Caulker.

The high winds finally subsided and on Wednesday, June 15th we headed back to Lighthouse. We had thought that we'd break it up by stopping at Turneffe Island, but we had such a good sail that we decided to push all of the way through. We didn't get to Lighthouse until 7 PM and by then it was completely dark. There were 5 boats in the anchorage and it seems that a couple of them decided that they didn't need to turn on the anchor lights (after all, who would come in here at night?), so that made finding them and a spot to anchor challenging.

The reason that we decided to push on to Lighthouse was because our friends on Querencia (Kim and Carl) had just made it Lighthouse and had dinner waiting for us. They had bashed their way from Isla Mujares, Mexico in these high winds and big seas. Believe me, they were happy to see a calm anchorage and we were happy to see them. Now it's March madness and dive, dive, dive!

That's about it from here. We hope that all is well with you. Keep in touch!