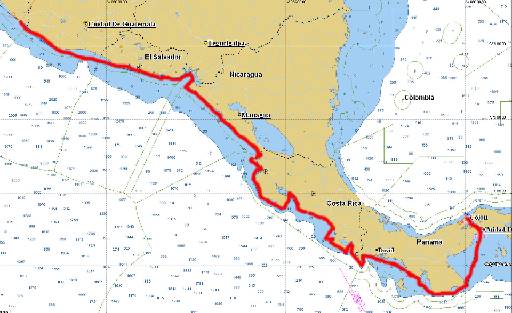 Yes, it's actually that time of the year again when you're going to start receiving blogs from me. This year promises to be very exciting as we'll transverse some amazing, albeit challenging, territory. Currently we're in Puerto Madero, Mexico, which is the southern most port in Mexico. From here we'll cruise along the coasts of Guatemala, El Salvador, Honduras, Nicaragua, Costa Rica and Panama. We'll then head through the Panama Canal and 1300 miles later we'll end up on the Atlantic side of Panama, where we'll store BlueJacket for hurricane season. That should be sometime towards the end of May or beginning of June.

We departed Boston's Logan Airport on January 13th and had a long day of flights to get here. We flew to Atlanta, then to Mexico City and then to Tapachula and we finally made it to our hotel 19 hours later. Thankfully the weather was good and we didn't have any issues with Customs, as we were hauling (4) 50 pound bags chocked full of boat parts and food stuffs. Believe me, it was quite the relief when Sue pressed the Customs button and we got a green light which allowed us to proceed through Customs without an inspection!

We arrived to find BlueJacket in very good shape, albeit very dirty. We had detailed the boat before leaving and the fresh coats of wax paid off as she cleaned up relatively easily. We've been working 11 hour days since then getting her ready to leave and at this point things are in good shape. 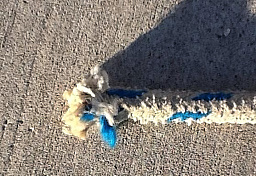 The most exciting event occurred when Sue was taking me up the mast and the primary line that was lifting me broke. Luckily it broke just after it passed through the line clutch, which keeps the line from going backwards, and just before it got to the winch. I also had a secondary safety line attached to the seat that I was on, so that should have kept me safe and Sue used to safety line to lower me down. The line broke where there was some chafing on the external jacket, but I didn't think that it had effected the inner core, where all of the strength is. I guess that the chafing allowed enough UV light to enter and make the inner core brittle.

One of the major challenges of being at Marina Chiapas is provisioning. Tapachula, where all of the major stores are located, is 20-30 minutes away by taxi. You can get there via collectivo, where you're packed like sardines in a van, but you need a car or a taxi to get your stuff back. Sue has been doing a great job of stocking things and making it all disappear into the boat. I'm not sure where it all goes, but as long as she knows, we're in good shape! 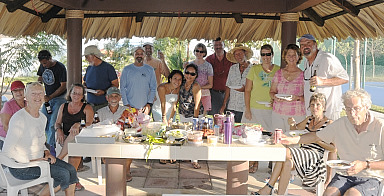 One of the nice things has been catching up with cruising friends that we got to know in past years. We caught up with Don & Cathy from Wind Rose and Don, Lisa and Savannah from Endorfin who we haven't seen (on their boat) since the Sea of Cortez 2 years ago. We're all headed the same way, although on different schedules.

Yesterday the marina held a party to celebrate the 1'st "class" of cruisers to store their boats at the marina for hurricane season. That was quite enjoyable!

Right now we're hoping to depart from the marina on Tuesday, but that all depends upon how well the final projects go. Right from the start we have our longest passage of the entire trip, 260 nm, so we want to make sure that everything is running well before we leave. But more on that later...